The Star and the Cross...the Same? 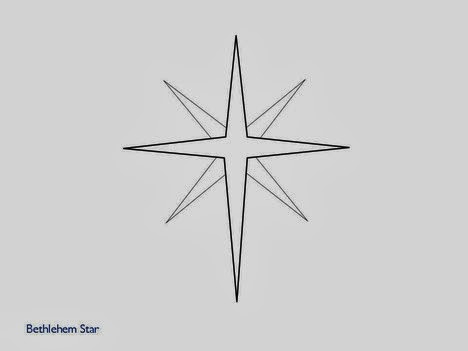 What symbolism! Have you ever looked at the ‘star’ we place on the tree or reflect above the manager scene? Is it a coincidence? Is it a prophetic symbol?

Yes, I know that the star was the light that shone above, to guide the way. But let’s look closer at the star! Is the shape that of the cross? Does it not only point the way for the wise men and shepherds to follow, but also the life of the Christ Child, for us in the future to follow?

Wow! How many times have we gazed upon the stars in the sky and all His creation? Are they telling us the story of old?

The star in the sky, on that Holy Night, reflected the love of God. Not only did He love His Son, but He loved mankind. The light itself was reflecting that love from the heavens to earth, leading the way to the cross.

The star was brighter than anything the heavens had ever seen. The cross would become,due to sin, the darkest they would ever see, turning the sky black for three hours.  Luke 23 says, "And it was about the sixth hour, and there was a darkness over all the earth until the ninth hour.  And the sun was darkened." Man has tried to explain the darkness that fell over the earth, but the time of Jesus crucifixion was at Passover, celebrated at the time of the full moon.

This star and the cross, both shaped the same, both showing the love of God....through His Son, Jesus. The star gave hope to those who came. They saw the Christ Child, the Promised One, the Messiah. The star shone down from the heavens, leading mankind, showing the way to baby Jesus.

Then, one fateful day on Calvary, that star became the cross. Yes, it still showed the love of God, through His Son, Jesus. The cross still gives hope to those who come, seeking Jesus. As Jesus hung on the cross, the light of the star took on our sin, turning to darkness. As the life of Jesus ebbed out of Him, so did the light, because of sin.

The cross leads us back to the light. John 1:4 "In him was life, and the life was the light of men."

The star long ago, shining so brightly, was celebrating the birth, the beginning of salvation for you and me.  The cross, covered with darkness, was the ending of the payment of sin. This brings us back to the light and love of God, for in Him there is no darkness. 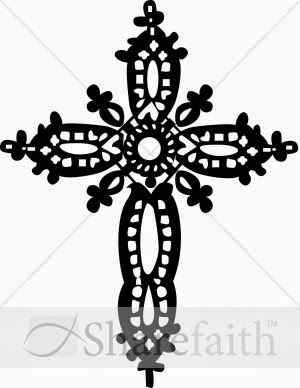 Both symbols the same, yet so different. Did those who looked up in the night sky see a star, or a mere reflection of the cross to come? Either way, let us celebrate them both with the gladness and excitement for the hope that both of them give to us through Jesus! For it is in Him that the only true light can be found!!

Wishing you all a Merry CHRISTmas!
gs
Posted by Ginger Sanders at 6:45 AM No comments:

Santa and Jesus, Both are coming! 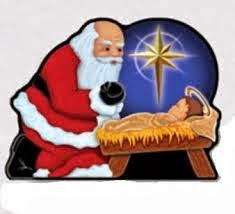 Lights are twinkling in the neighborhoods, sweet aromas drifting through the houses. Yes, it is the time of year, where the laughter is heard throughout the house and the excitement of checking out the beautifully wrapped gifts under the tree!

I remember one year when our daughter, Kara, came to me and in a quiet, low voice told me her two younger brothers had apparently opened all their gifts under the tree and rewrapped them. She could tell by the retaped paper. No, I did not ask her what she was doing, snooping under the tree herself!

Giving Kara a plastic bag, I sent her to the driveway to bring back rocks. She thought this a strange request, but followed the instructions. Then, telling her to help me get all the boys presents out from under the tree, we took them to my bedroom. We carefully opened each one, removed the toy or gift and replaced it with rocks.  24:30  "At that time the

As the day came to open Christmas gifts, the house filled with excitement. We passed out all the gifts and as our tradition, we took turns by opening one present at a time.  When the oldest of the young boys, Todd, got his gift, he grinned and shook it and said, "I sure hope I get a game!" (which was what he thought was in the box!) However, when he opened it and saw that there were only rocks in the box, he looked puzzled. I gasped and said, "What? You didn't open your presents before Christmas did you? When you open them before Christmas, they turn to rocks!" (a panic came across both Todd and B.J.'s faces!) We proceeded until the next 'gift of rocks' was opened. It was beginning to look like a very dismal Christmas for the boys! They had such a disheartened look on their faces, it broke my heart.

Going into the bedroom, I pulled out a box that contained the original presents. The boys knew they had been caught, but had been forgiven. What started as a festive occasion, turned into fear and dismay, ended with peace and gladness....and love.

Christmas is a time for festivities, family and food.  I love the reuniting and the laughter of the little ones enjoying the new toys. I do not have a problem with Santa coming to the children and spreading joy. It is an innocent way of families showing their love in a silent way. Santa gives the gift with no expectations of receiving one in return. This is true love.

But, let us remember the truth of the celebrations. That one time there was a baby that was born, the beginning of salvation for you and me. The gifts He brings to us are eternal life, Himself, and the daily Presence of the Holy Spirit....all from God the Father.

We know the things God the Father gives us will never turn to rocks, they are eternal. Let us all be as children this season! Excited about the Christmas holiday! Looking forward to the sighting of the love that is shone by giving of gifts. We as Christians know that we celebrate the birth of the Christ Child, but we also know that we need to look up. He is coming again. Let us anticipate, with the childlike excitement, His return.  Is that Santa breaking across the sky in a sleigh full of gifts or could it be the Son of God, coming, bearing His gift of eternal life?


"So Christ, having been offered once to bear the sins of many, will appear a second time, not to deal with sin but to save those who are eagerly waiting for him" Hebrews 9:28

Matthew 24:30  "At that time the sign of the Son of Man will appear in the sky, and all the nations of the earth will mourn.  they will see the Son of Man coming on the clouds of the sky, with power and great glory.
Posted by Ginger Sanders at 10:19 PM No comments:

Are you registered? Census, taxes, insurance?

Whenever we turn on the news, we hear the newest updates...good or bad...about the upcoming insurance plans. People having trouble registering or costs challenges.

Some folks are already talking to their tax accountants, as the end of the year approaches, trying to take care of business before this year closes out.

What if...just what if, we had to return to our family's hometown and register for the census? What if it was required, not just suggested? It would cause even more hardship on families, because we are such a migrating and moving people.

But remember this: Luke 2:
2 In those days Caesar Augustus issued a decree that a census should be taken of the entire Roman world. 2 (This was the first census that took place while Quirinius was governor of Syria.) 3 And everyone went to their own town to register.
Every generation has to deal with governments and laws. Am I saying I agree with each one, absolutely not! But there have been decrees through the ages that have changed who we are, whether good or bad.

As this Christmas season approaches, we hear about the birth of Jesus in the small town of Bethlehem.  We know the story. But it brings about the question "Do you know Jesus?" Is your name written (registered) in the Book of Life? This is the only registration that will make a difference for eternity. 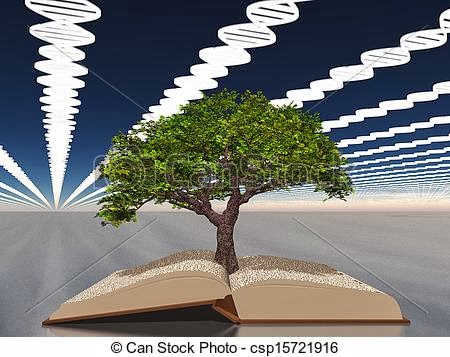 
Think about the Christmas celebration throughout eternity! It  can happen! Praising Him who was born in a manger, in a little town called Bethlehem, forever. Make sure your name is registered! What a reason to celebrate!

Posted by Ginger Sanders at 8:41 AM No comments:

Decorations for the Home and Heart 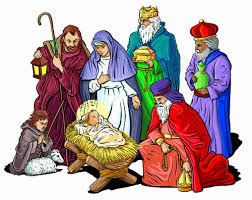 While shopping before Thanksgiving, I noticed the gala of the holidays happening in the stores: Trees glistening, trains and baby dolls, candies for baking, etc. The excitement starts to build in not only the stores, but in our homes and hearts. The Christmas season seems to start earlier and earlier in the stores and the malls.

We see friends and families starting to put their own trees up, before one holiday is over, to begin the celebration of Christmas.

Our children have started their own traditions in their homes.
One of our daughters in law places a tiny plastic pickle, hidden somewhere deep in the tree, for the children to find. The first one to spot the pickle gets to open the first present on Christmas morning. Our little granddaughter was literally lying under the tree, looking up, trying to find the green pickle!

Another of our daughters in law has 'Candy Cane' and 'Snowflake', an elf for each child, appear each Dec 1 to "report to Santa". (They even brought tiny marshmallows when they showed up this year!)

We have laughed and joined in the fun of the holidays as we have seen the twinkle in the eyes of our grandchildren as they have discovered the joys of Christmas.

While reading last night about Bethlehem, the article told of the decorations and lights that are sent to the little town, from all over the world, this time of year. Even some Muslims like to put up a tree and join in the celebrations! (But they do not believe Jesus is the son of God)

It made me begin to think. Even those who do not believe like to celebrate Christmas. I do not think there is anything wrong with any of these things, from the pickle to the Muslims putting up a tree. It is all part of the season of joy and peace. But, there are two questions:
The answer would be to keep Jesus in you heart all year, sharing His love with others. Let us, as Christians, not let the secular world beat us when it comes to celebrating Christ! When people come to your home, do they know Jesus lives there? The way we live our lives, do people know Jesus lives in your heart? The way we dress, talk and act, do we glorify Him?

May our life, actions, and works glorify our Father in heaven!
Matthew 5:14-16 “You are the light of the world. A city set on a hill cannot be hidden. Nor do people light a lamp and put it under a basket, but on a stand, and it gives light to all in the house. In the same way, let your light shine before others, so that they may see your good works and give glory to your Father who is in heaven.” (ESV

Posted by Ginger Sanders at 4:14 PM No comments: